The Biden administration is seeking to extradite Julian Assange, an award-winning Australian journalist, to face charges of espionage that carry a life sentence and possible death penalty. His only “crime” is the publication of document exposing the war crimes and diplomatic intrigues of US imperialism and its allies.

Since being arrested and dragged from the Ecuadorian embassy in London in April, Assange has been confined to the maximum-security Belmarsh prison. The persecution of Assange is intended to terrorise all journalists and whistleblowers. For ten years, the US, British and Australian governments, with the shameless support of the media and the establishment political parties and trade unions, have presided over a relentless campaign of persecution against the journalist. This has involved fabricated allegations of sexual assault and personal slander, conspiracy and spying, and attempts to silence and isolate all those who defend him.

We urge all defenders of democratic rights and opponents of imperialist war to get involved and join the fight to free Julian Assange!

The Labor government is hostile to Assange, in direct proportion to its support for US-led militarism, including the confrontations with Russia and China that threaten nuclear war.

Workers and students demand freedom for Assange at Melbourne protest

The Socialist Equality Party is holding an online meeting this Sunday, 3 p.m. (AEST), to discuss how to take forward the fight for the WikiLeaks founder’s freedom.

Such an appeal would likely begin to address the real issues of democratic rights at stake in the more than a decade long persecution of Assange, which the US government and British courts have largely contrived to exclude from proceedings.

The Socialist Equality Party calls on workers, students and professional people to attend its online meeting on Sunday July 10, at 3 p.m. AEST to mobilise to defend and free Julian Assange.

Sign up here to subscribe to the Free Assange newsletter for the latest news and notifications of upcoming events. The perspective of issuing plaintive appeals to Assange’s persecutors has failed. What is required to secure his freedom is the mobilisation of the immense power of the American and international working class.

Assange’s kangaroo court extradition hearing has seen the UK, which boasts of being one of the world’s oldest democracies, sink to the level of a tinpot dictatorship.

For a worldwide campaign to prevent Julian Assange’s rendition to the US!

An international mass movement must be organized to stop the extradition of Julian Assange to the United States.

Stop the persecution of Julian Assange!

Despite a ruling that Assange has been subjected to “arbitrary detention,” both the UK and Sweden vow to continue his persecution.

Assange’s sole “crime” was to publish secret documents exposing war crimes carried out by the US government in Iraq and Afghanistan and conspiracies hatched by the US State Department in countries around the world.

Oppose the extradition of Julian Assange

The decision last week by the High Court in London to dismiss the appeal of WikiLeaks founder Julian Assange of his extradition to Sweden is an attack on democratic rights.

Julian Assange has been arrested and jailed based on charges that are nothing more than a pretext for an act of political repression dictated by the US government.

This speech was delivered by Thomas Scripps, assistant national secretary of the Socialist Equality Party in Britain, to the 2021 International May Day Online Rally held by the World Socialist Web Site and the International Committee of the Fourth International.

speech by oscar grenfell, 2019
The persecution of Assange and Manning is an attack on the working class 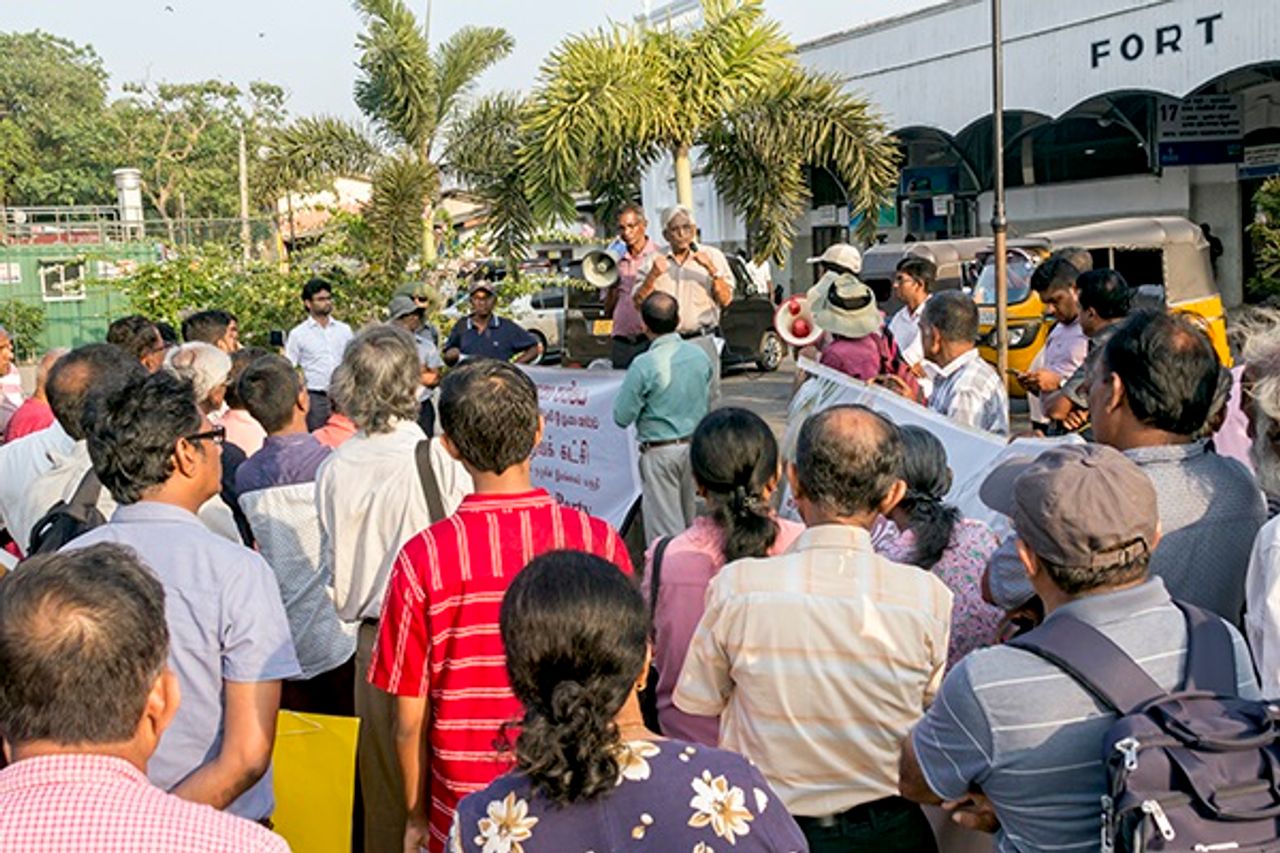 About 60 workers, young people and housewives joined the picket, which was held outside Fort Railway station in Colombo.

The meeting was attended by more than 130 workers, youth and students who came from all over the UK.

The weekend rallies point to growing international support for Assange and Manning and a deeper political understanding and determination to fight by important layers of students, workers and youth.

Afterwards, a University of Colombo student, declared: “I agree with the point made in this meeting that the fight for the freedom of Assange is so crucial for the defence of democratic rights internationally.”

Speakers explained the persecution of Assange and Manning is part of an escalating attack on democratic rights by governments everywhere.

“If two million people can come out on the streets of Hong Kong against extradition legislation, then we can surely build such a mass popular movement on a global scale to free Assange and Manning.”

our reporters•1 July 2019
speech by chris marsden, 2020
Victories are not won through political cowardice, but in struggle

This speech was delivered by Socialist Equality Party National Secretary Chris Marsden to a public rally held in London on Sunday, February 23.

speech by James Cogan, 2019
Speech to the Free Assange Rally

ten years since the wikileaks releases 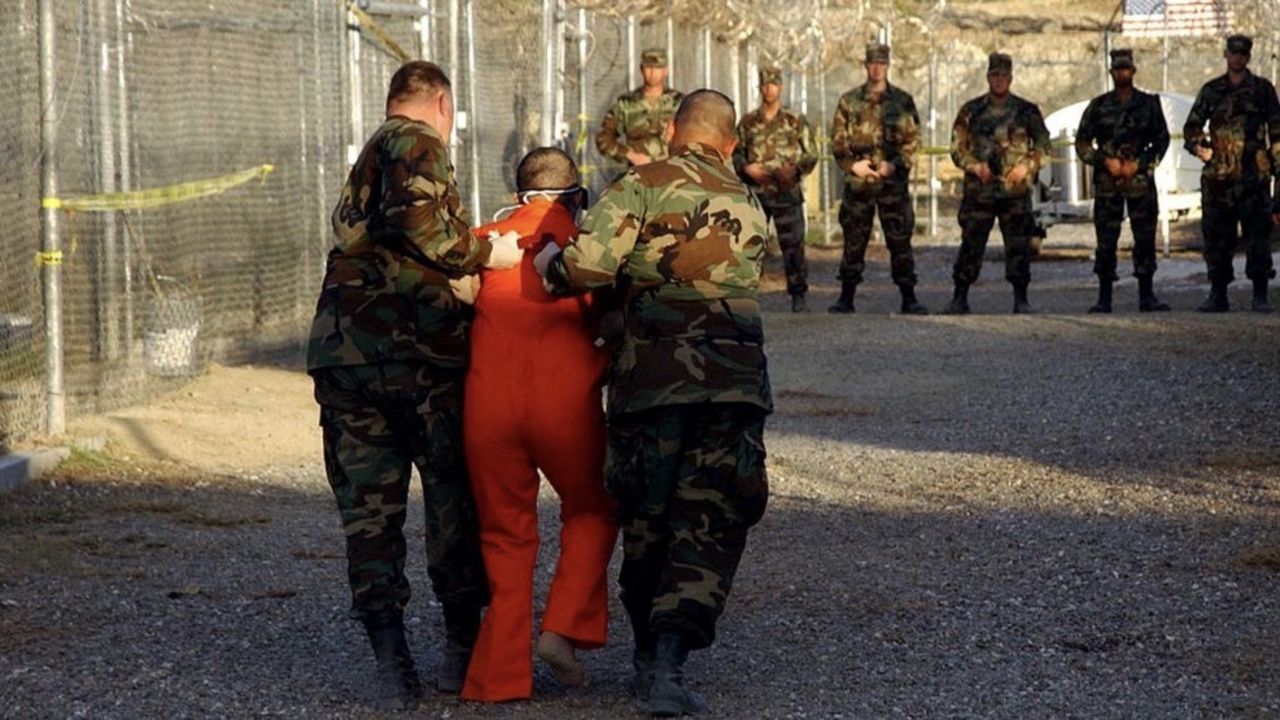 Ten years since WikiLeaks and Assange published the Guantánamo Files

The files exposed the lawless global network established by the US and its allies as part of their “war on terror.”

Ten years since WikiLeaks published the US diplomatic cables

WikiLeaks contributed to a growing recognition among workers and young people that state criminality and ruling class conspiracies are not accidents or the work of a few bad individuals, but the product of a whole social system based on the rule of competing oligarchies which must be overthrown. 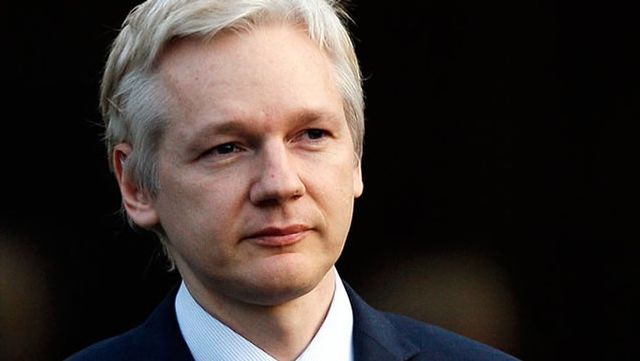 The publication was an imperishable contribution to the fight against imperialist militarism, for which the war criminals and their political representatives have never forgiven Assange. 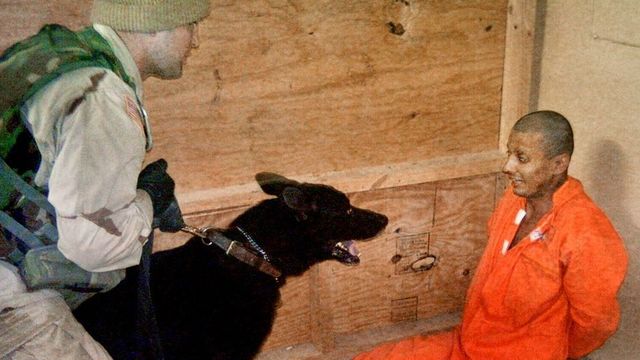 The documents provided the world’s population with an unprecedented insight into the first war crimes of the 21st century. 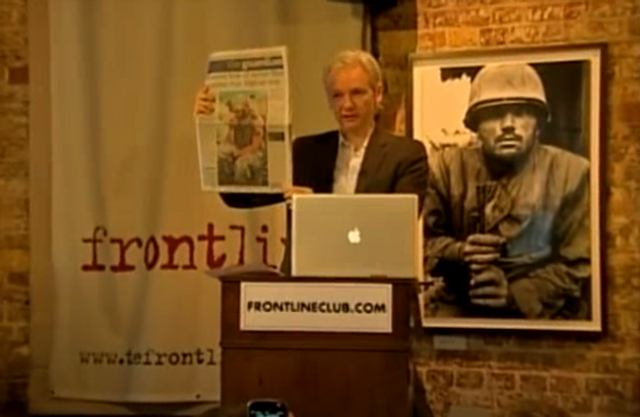 by patrick martin, 2010
WikiLeaks and Tunisia

American foreign policy specialists have described the events in Tunisia over the past week as the “first WikiLeaks revolution.”

Read
by david north, 2016
A Quarter Century of War: The US Drive for Global Hegemony

Beginning with the first Persian Gulf conflict of 1990–91, the United States has been at war continuously for a quarter century. While using propaganda catchphrases, such as “defense of human rights” and “War on Terror,” to conceal the real aims of its interventions in the Middle East, Central Asia, and Africa, as well as its confrontation with Russia and China, the United States has been engaged in a struggle for global hegemony. 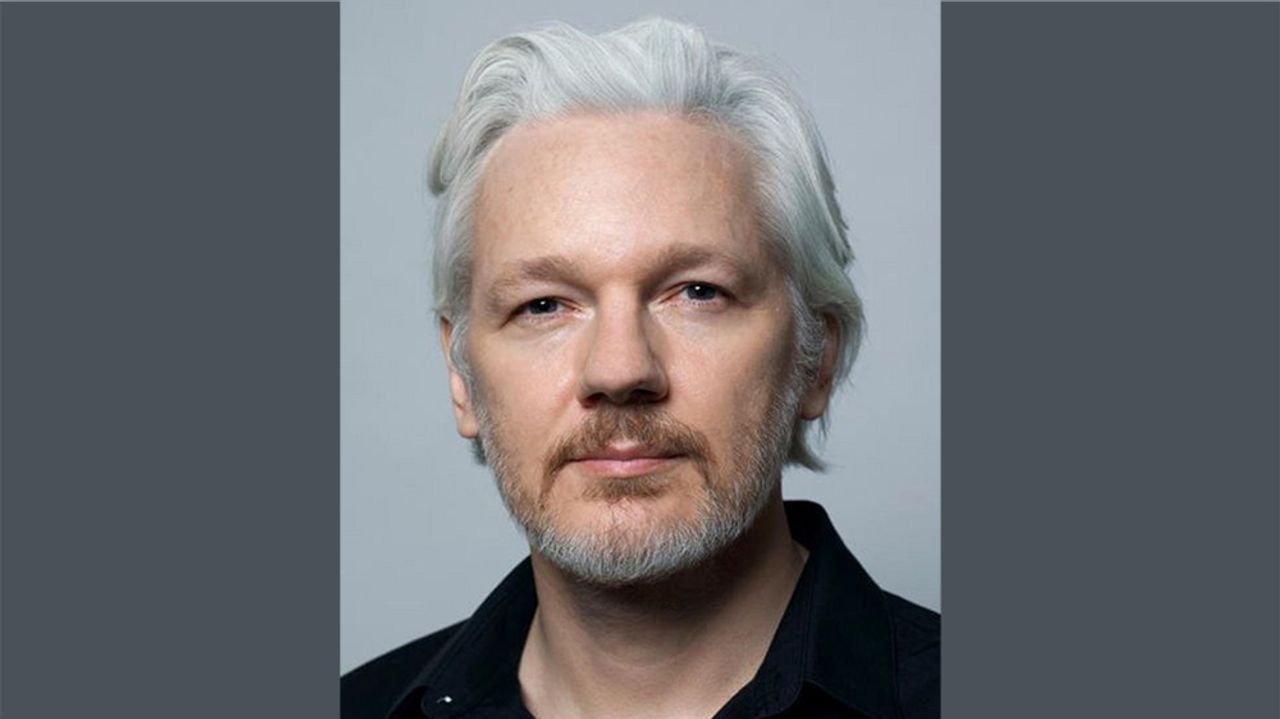 After the Assange hearing—the fight against imperialism

What took place at London’s Old Bailey was a process of vicious retribution against a journalist who exposed the barbarism of the ruling class before the world.

Former US prison warden testifies Assange will be treated like a “terrorist”: The “war on terror” comes home

Baird’s testimony made clear that Assange is now the victim of the CIA-backed torture and rendition which he courageously exposed as WikiLeaks publisher and journalist.

Assange faces a fate “worse than death” in US prisons, witnesses tell court

No amount of lame denials can hide the fact that if Assange is put in the clutches of these people, he will be disappeared into the darkest corner of the US prison system.

What UN Special Rapporteur on Torture Nils Melzer described in May 2019 as the “public mobbing” and “psychological torture” of Assange has had the desired effect.

Assange dragged from embassy “on the orders of the president”

Cassandra Fairbanks testified that Arthur Schwartz, a wealthy Republican Party donor and key Trump ally, had provided her with evidence of plans by the Trump administration to impose the death penalty.

Testimony from John Goetz established that the only “harm to life” came from US war crimes which Assange and WikiLeaks were trying to expose.

Ellsberg said that “with the Manning and Assange papers, I found my name being mentioned all the time as a very good person … to use me as a foil against these new revelations which were supposedly very different from mine.”

Thomas Scripps•17 September 2020
by richard hoffman, 2020
The prosecution of Julian Assange, the destruction of legality and the rise of the national security state

The political and legal attack on Assange represents a qualitative intensification of the destruction of core rights and, indeed, on legality itself as the mode of bourgeois rule.

Floyd Abrams, who played a significant role in the legal defense of the New York Times’ publication of the Pentagon Papers, has endorsed the government’s campaign against WikiLeaks and its editor Julian Assange.

read
the pseudo-left and liberal media slander and isolate assange 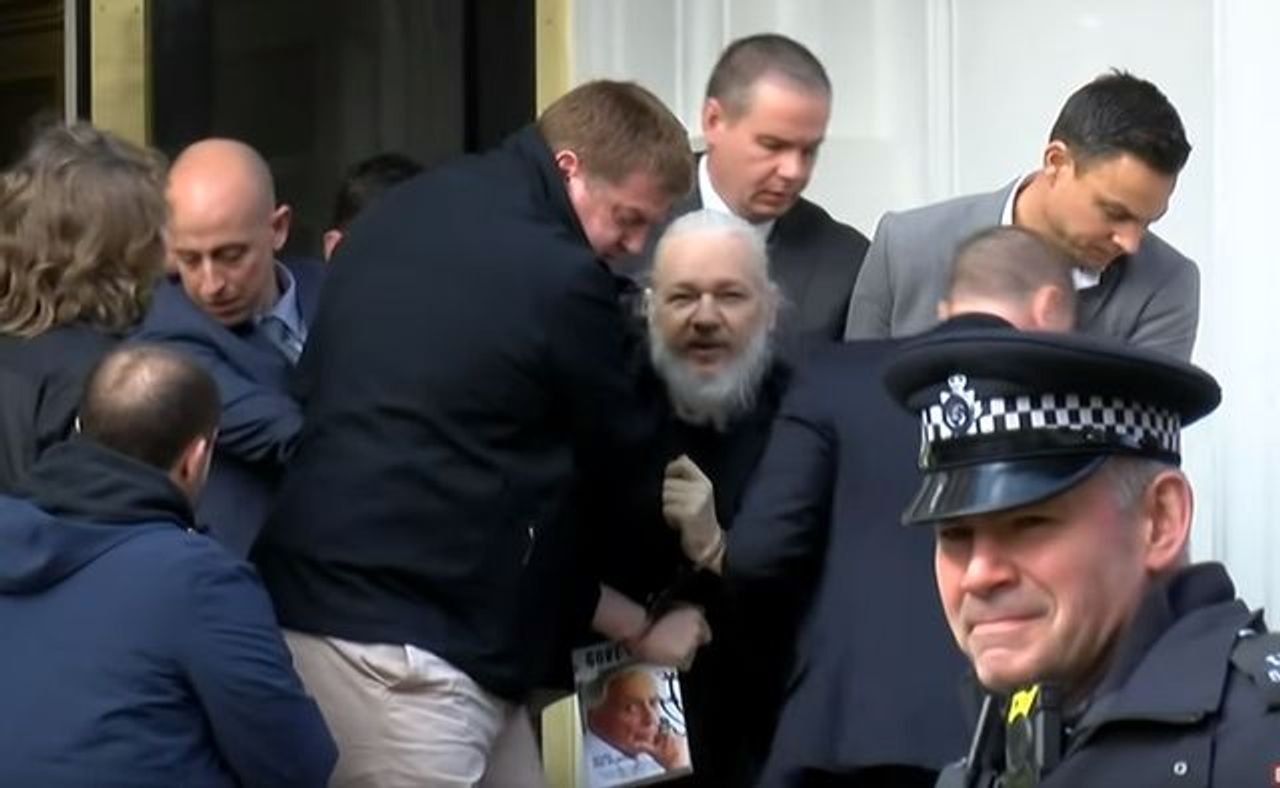 Socialist Alternative’s article, “The betrayal of Julian Assange,” is a crude attempt to cover up its own role in the “betrayal” of the WikiLeaks publisher.

The SWP have joined in the efforts to railroad Assange and blacken his name, justifying a course of action that would end with the WikiLeaks editor facing a show trial in the US.

A host of articles attacking Julian Assange this week are representative of what the world-renowned investigative journalist John Pilger aptly described as “Vichy journalism.”

The Guardian attack on Assange exposed as politically-motivated fabrication

The lack of any case against WikiLeaks explains the scurrilous allegations by the Guardian newspaper last week.

The pseudo-left stabs Assange in the back

Despite initially voicing opposition to the attack on Assange, the entire gamut of the middle-class “left” has either ignored, downplayed or supported Assange’s persecution.

The Times’ vilification is aimed at discrediting in advance any information from WikiLeaks exposing the crimes of US imperialism and its favored candidate, Hillary Clinton.

Britain’s largest pseudo-left groups have lined up behind the demand that WikiLeaks founder Julian Assange be extradited to Sweden.

Despite never having been charged with a crime, Sweden’s investigation provided the pseudo-judicial pretext for embroiling Assange in the legal system.

The discrediting of the Swedish investigation, which played a linchpin role in the US-led pursuit of Assange, exposes the lawless character of the entire operation against the WikiLeaks founder.

read
the dead-end of the official don't extradite assange campaign 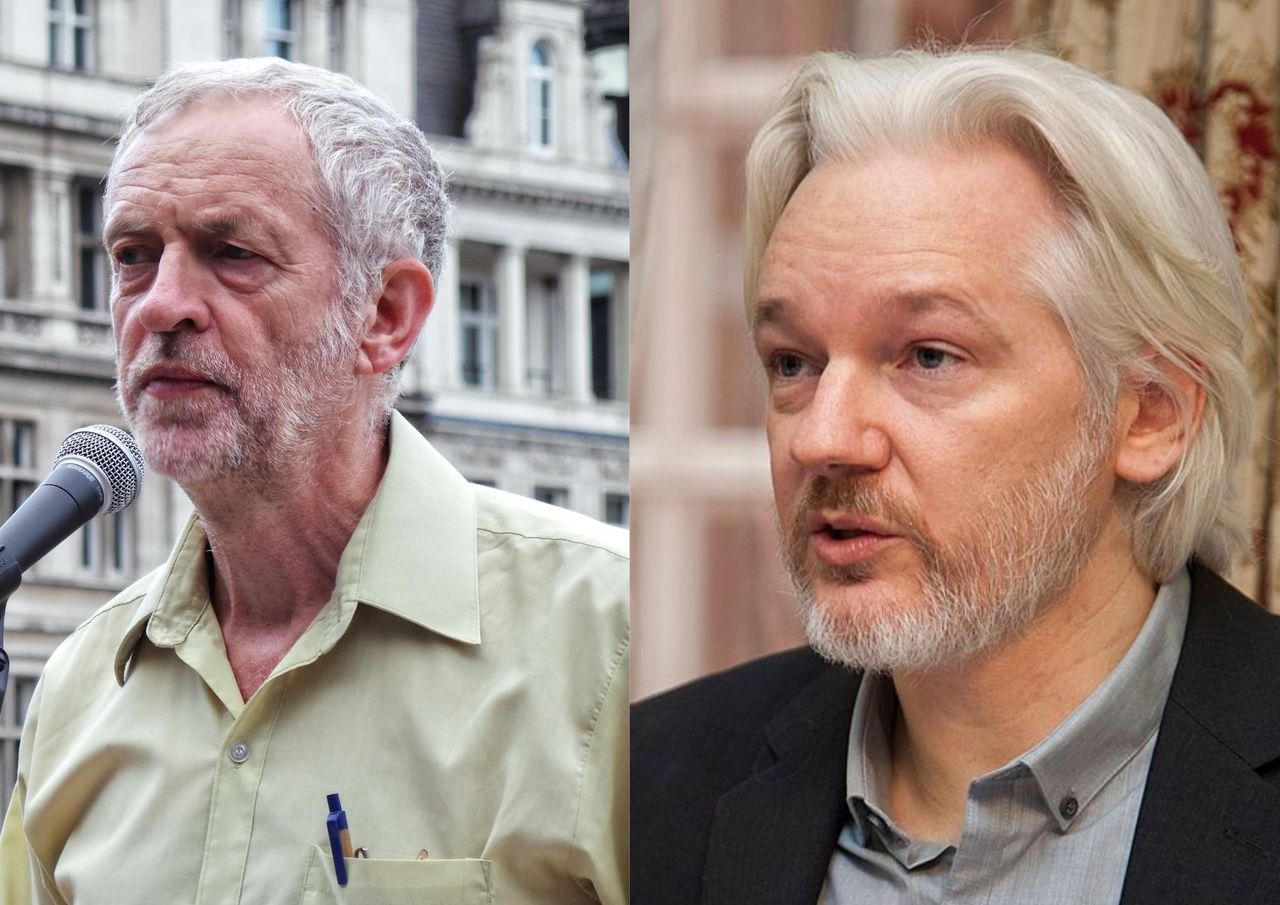 The DEA makes no appeal to the working class whatsoever, or to any broader layers of the population. It has produced a near hermetically sealed campaign of more or less prominent individuals, held in high regard by each other, who attend each other’s events, and repost each other’s comments.

For the past year, Corbyn has led the suppression of any discussion over Assange’s imprisonment in Britain and the country’s participation in the US-led attempt to destroy him.

Corbyn said nothing when he could have raised Assange’s fate in Parliament every single day, informing millions of the fundamental violation of his democratic rights.

Assange turns 50 in Belmarsh prison, his life still under threat

Assange has now spent more than one fifth of his life persecuted by the US state and its allies.

The struggle to free Julian Assange requires an implacable struggle by the working class against the Johnson and Trump governments now conspiring to silence him forever.

The aim of the Don’t Extradite Assange group is to rehabilitate the Labour Party and the trade unions, its “left” representatives in particular, and to corral the movement in defence of Assange under their control.

It is more than two years since a United Nations human rights panel ruled that Assange’s persecution by the Swedish and British governments amounts to “arbitrary detention” and a violation of international law.